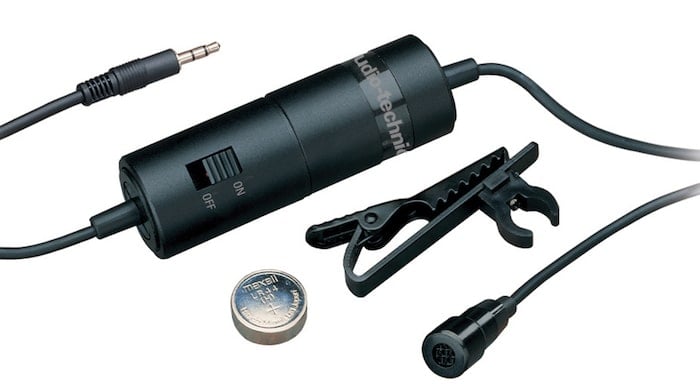 Getting the sound right is really important when you’re making a video with your iPhone or iPad. So here are some real world tests with different iPhone microphone options. The first film is an interview, using two mics designed for the iPhone; the second compares the built-in mic with a variety of directional, lavalier and wireless options.

I shot this interview with the Rode VideoMic Me and the smartLav+, two relatively inexpensive microphones designed specifically for smartphones. The directional VideoMic Me was mounted on the iPhone 6S; the smartLav+ was plugged into an old iPhone 4S running the free Rode REC app. I synced the audio up later in Final Cut Pro X.

At this distance, there isn’t a huge difference, though the lav mic has a richer sound. But the big advantage of using the smartLav into a separate phone or recorder is that the sound would be as good, with the same level, however far away the person is. For short clips, this is a great affordable alternative to using a radio mic.

For these tests, I clamped my iPhone 6S to a tripod outdoors behind my house. The phone was pointing towards solid walls, but children were playing in the park about 100 feet (30 metres) behind me. I stood about three feet (a metre) from the phone.

I used Filmic Pro as it has adjustable audio levels and an meter. I’ve adjusted the sound levels in Final Cut Pro X, but I haven’t added any other audio corrections. I tested both dedicated smartphone microphones, and ordinary microphones connected with an adapter.

Apologies to any Shakespeare fans for my uninspired recital…

The built-in back microphone is OK if you’re shooting a closeup without too much background noise.

But it struggles in this situation. The level is low, you can hear wind interference, and there’s a lot of background noise.

Microphones on the camera are never ideal, unless you’re really close: you need the microphone near the sound source. So for speech, a lavalier or ‘lav’ on the presenter or actor’s clothing is best. But when it’s connected directly to the camera, it limits how far the person can move.

Wireless systems don’t have this problem, but they’re expensive. A cheaper option is to plug the lav mic into another phone in the presenter’s pocket, then sync the sound later. 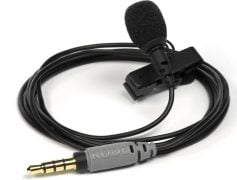 This relatively affordable, unpowered lav microphone connects directly to the iPhone’s microphone/headphone socket. The wire clip that attaches it to clothing is very secure, unlike some cheaper lav mics, and allows you to loop the lead to reduce strain and handling noise. You can also get an SC6 adapter which lets you monitor on headphones and connect a second smartLav+ (though this can also suffer iPhone 6/6S issues).

Sound from the smartLav+ is good. 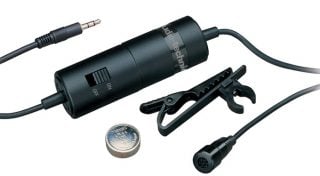 I was really surprised by how well this inexpensive lav microphone performed. In the past I’ve tried it with a Zoom H1 audio recorder and had trouble with levels and hiss. But it works fine on an iPhone with the SC4 adapter.

The ATR3350 has an extremely long lead, which gives your presenter a fair bit of freedom of movement. It’s not perfect: it’s easy to lose the clip, changing the SR44 button battery is fiddly, and it’s easy to forget to turn it off. The current version – the ATR3350IS – includes a smartphone adapter.

Sound is a bit thinner than the Rode, but it’s great for the price. 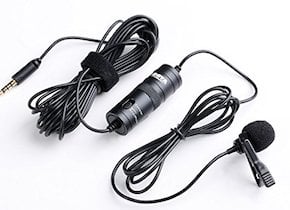 Update: the Boya BY-M1 lavalier microphone (review with samples) is more affordable, better designed and has better sound than the ATR3350IS.

If you’re moving around a lot, a directional microphone might be a better choice than a lav.

This is a very small, discreet microphone for smartphones. It’s easy to attach and has a ‘pass-through’ headphone socket so you can listen as you record. It comes with a bulky but effective furry windjammer.

It produces much clearer sound than the built-in mic, with a better level, though you can still hear quite a bit of background noise.

This powered directional mic lets you switch between audio levels and has a ‘low cut’ option. It needs an adapter. (This is the older version: the newer model has more sensitivity and a better suspension system.)

I added a Deadcat furry windjammer, which is essential for working outside but not all that effective. It’s OK with light winds but you can still get trouble with gusts. This setup is fine with the standard lens, but the Deadcat appears in shot if you use a wide angle adapter. I’ve now bought a hot shoe extender to position it further away from the lens; you could also use a straight flash bracket between the clamp and the tripod or pistol grip.

Sound is good as long as you’re fairly close.

Wireless systems let you use a lav mic without tethering your presenter to the camera. Both these systems are digital, so the signal level doesn’t vary as long as you’re within range. (The Rodelink recording was from about 10 metres away, and I could still get a clear signal from twice as far). They use the same 2.4Ghz waveband as wi-fi, which might interfere with the signal, but I didn’t encounter any problems. 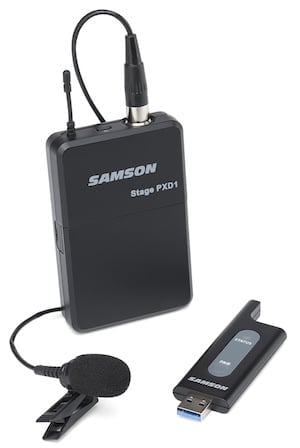 This affordable wireless lav system is neat and compact: the little USB receiver connects to the iPhone through the Lightning socket. It’s easy to set up and pair.

The sound seems fairly ‘rounded’ but I had to turn the level up which causes some hiss. 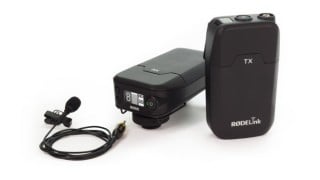 I use this system a lot with my camcorders and DSLR. It’s reasonably priced for a pro wireless system, but it still costs about four times as much as the XPD1. Pairing is simple and you can select different gain levels. With an adapter, it works very well with the iPhone. The supplied furry wind cover is far more effective than the Deadcat. But the receiver and transmitter are bulky.

You can use microphones that are designed for smartphones, or you can use an adapter to connect other microphones. This gives you a bigger choice.

You should really monitor your audio as you film. Filmic Pro lets you do this, with the right adapter (see the kit list on this page) but unfortunately there’s an issue with the iPhone 6 and 6S. Sometimes it works fine, but sometimes I can’t hear the headphones, or Siri launches as soon as I connect them.
Update: on some microphones or adapters you can solve this by using tape to stop the metal surround at the base of the plug from contacting the phone body. Otherwise this TRRS extension lead seems to solve the problem, though the phone may need to be restarted to recognise the microphone.

The best quality setup I tested is the Rodelink Filmmaker Kit (needs adapter). But if you want wireless on a budget, the Samson XPD1 is a lot cheaper.

The VideoMic Me is a good choice for an on-camera mic (not for iPhone 7). The VideoMic Pro is better (at about three times the price) but it’s a lot bigger and more obtrusive.

My choice for a discreet system? The VideoMic Me, plus a Boya BY-M1 lavalier microphone plugged into a phone in the presenter’s pocket.

iPads and iPhones for filmmaking