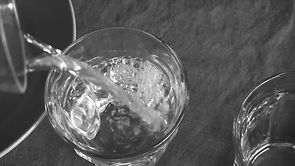 Multimedia artist Michele Guieu’s film Granted shows how you can get a powerful message across in a short space of time by keeping things simple. Michele writes

“Water is a subject which I am very interested in. I wanted to convey an important idea with a very short video…No water was wasted to make the video – I only did one take (that is usually what I do in my videos), following my family and friends in their daily activities”.

Why it’s cool
As with lots of short films, what makes this film work is a simple idea carried out well. It’s not obvious at the beginning what the film is about: that gets revealed as we watch it. The shots are precisely framed and the only sound is the carefully recorded noise made by the water. What unifies the film is that it just shows one thing – water flowing or being used, in relative closeup – and it’s in black and white (which lets us get the point of the movement rather than being distracted by changes in the colour of the image). But it’s also varied: the shots have been carefully edited together so that we notice contrasts in the sound from shot to shot. There are 25 shots in this one-minute film so we never get bored. Finally text is added towards the end to emphasise the message.

Making a film like this
Think of one particular thing where there are similarities and contrasts, and then how you could show that in a film. For example, you could maybe do a film of shots of different people’s feet walking or running; different kinds of food being cooked; people’s hands doing different things.

Recording audio without distracting background sound is tricky. It helps if you get really close and if you can get people around you to be quiet. You could use a ‘directional’ microphone such as a Rode Videomic, or a separate audio recorder like a Zoom H1 or H4n.

Most video editing programs will let you add a black and white effect, and to add text as overlays on the image.