Films are made up of sequences of shots. So if a single shot is a bit like a sentence in a story, a sequence is like a paragraph.

When you’re filming, you should think about how the clips will fit together into these sequences. You can follow some simple systems and rules to help with this.

You need to film enough shots to show everything you need to show. You also need to make sure you’ve got enough material to edit with. You can work this out by using a storyboard or shot list to plan your film. You can also follow some simple patterns or sets of shots: they’re described on this page.

You also need to make sure that your shots will fit together properly. To do this, you need to understand the continuity system. This is a set of simple rules about where to put the camera, how to frame the shots, and how to edit them. If you follow the rules, it’ll be easier for your audience to understand what’s going on. And your film will seem to flow more smoothly, so viewers will get  more involved in the story. Learn about continuity. 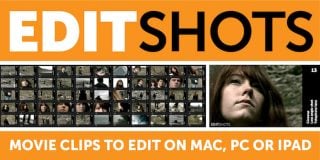 My education package Editshots will help you learn the rules of shot selection, coverage and continuity. It includes a short film (55 shots) for you to edit, and a step-by-step guide. It’s only $15/£15 for individual use.